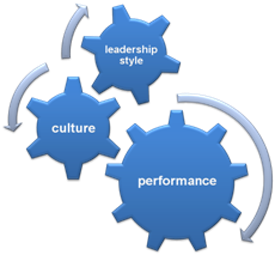 How does leadership style affect culture?

It stands to reason therefore that at different leadership styles and behaviours are going to impact culture in different ways.

Michael Germano points out that successful leaders influence those around them to reap maximum benefits from the company resources including its most vital- its people. The effectiveness of leadership in moving people to a shared vision directly affects everything from its staff to customer interaction.

Blanchard’s situational leadership was based on the principles of directing, coaching, supporting and delegating. As a theory it was developed in the late 1960s on the premise that different situations require different types of leadership. It required leaders to identify their most important tasks or priorities and then consider the readiness of their followers by analysing the group’s abilities and willingness. Depending on the level of these variables the most appropriate leadership style style to suit the situation is applied. Transformational leadership moved on from that to focus on idealised influence, inspirational motivational, intellectual stimulation and individualised consideration.

Transformational leaders appeal to the higher ideals and values of followers or in this case employees, and garner trust, respect and admiration. Not only are they involved and concerned in the process, they are focused on helping every member of their team succeed. It encourages people to collaborate rather than working as individuals, and potentially competitively with one another.

As mentioned, culture is learned behaviour and  leaders and executives shape culture so their approach and style in a given context has an impact on the culture that prevails.